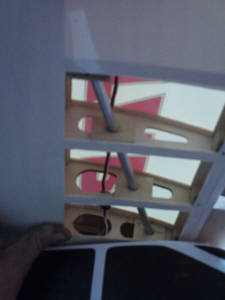 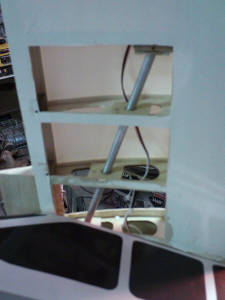 Had a pair of damaged wings from my early training days,(actually had a friend learning without a buddy box) oops. So I dragged them out of the salvageable parts box and decided to put some rake into them. (Still have a straight pair and tail for standard configuration). A new steel brace bar and support tubes were installed after cutting the root end to produce a one chord length sweep at the tip. Several balsa laminate layers were installed at the leading edge root after locating the root leading edges. There is zero dihedral in the wing. The wing root was then capped with a thin ply rib profile. The ribs along the aluminum support tubes were reinforced with 1/8 birch ply, 3/4 square, and on the opposite side a 1/4 x 3/8 balsa piece the length of the rib.

The center servo was removed and two servos "Y"ed together were installed into each wing panel. The ailerons were produced from two "cants" and bonded with plastic hinges installed. Access areas for the modification were covered with monocote patches. The fuselage was modified by installing another NexStar gear box. This box is placed up against the aft most bulkhead under the wing mounting area. Placing the gear in this position was required to keep the tri gear arrangement, as 12.5 oz of lead was installed to a modified vertical fin (balsa planked) that brought the cg back to the new center of pressure (CP) which shifted aft about 5". Last the nylon 1/4 20 wing bolt was swapped for a zinc plated 1/4 20 steel bolt, since most of the flight load is now on the aft section of the wing root. Also note that the engine is not the OS 46 as originally supplied. The current engine is a OS 61 and supplies enough power with the Straight wing config for vertical climb with a 10 x 8 prop. 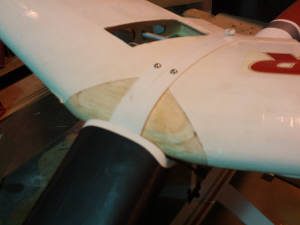 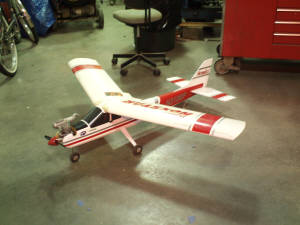 The first test flight was on January 16, 2011 at the AERCF field. High speed taxi was a bit twitchy as there was to much down trim in the elevator and it tended to wheel barrow. So neutral trim and try again. The nose took a little coaxing with up elevator to lift at what was about a little over stall speed. The straight line of travel went from ok to OH #@$! correct and close throttle. She has a very strong propensity to yaw and roll. The sweep don't help this! Next try to use a little less control input. Airborne! half throttle and scooting right along. Climb #$@! there's that yaw and roll again. OK now lets just try to save the machine from the garbage can. 1/4 throttle level off keep the roll and yaw under control.... OK it turns just fine just be gentle #$@! heading for the deck and #$@! OK Level again coax it around the pattern... good... line up on the runway... almost there... TOUCH DOWN! ........ Hey let's do it again... Next flight was about the same but with less #$@!... I've come to the conclusion that the issue is with the wing tips. The aft rake of the tip produces a unstable area of drag. When the drag components are not equal the aircraft will yaw at the CG. This in turn produces a lift imbalance which induces roll and the #$@! factor increases. So the next step is get my saw out and amputate the offending naughty bits...

We'll the naughty bits were cut off and the wing tips capped off and patched with monocote. But as time will tell things are not always as they seem. 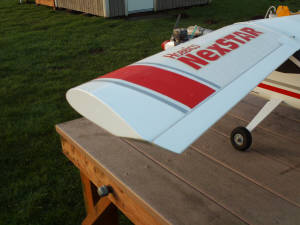 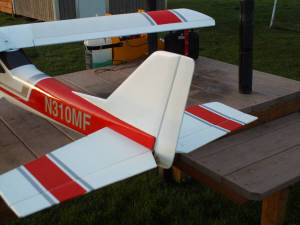 Second test flight was at the AERCF field Jan 23, 2011. All was well until just as the wheels broke ground. The ugly yaw/roll was back, but with a little anti roll assist from the safety fence. I managed to save the aircraft again from the garbage can. Once under way the yaw/roll was not as bad as before, with exception of the take-off, but still had the issue of not remaining stable. You didn't dare take your eyes off the plane nor make any drastic stick movements. Pitch control was rock solid. Making several inbound approaches I noticed that once trimmed for what appeared to be a more stable flight behavior, that the aircraft was trimmed cross controlled and still required many corrections of rudder and aileron. Then it dawned on me that I had not considered all that side area of the fuselage that was now forward of the CG. DUH! Can you say not enough vert-fin and rudder! Just like a mathematical equation, what is done to one side has to be done on the other. So More vert-fin and rudder is on the next mod list. By the way, when testing it is always a good Idea to keep the immediate area adjacent to the runway clear of soft targets...(people) 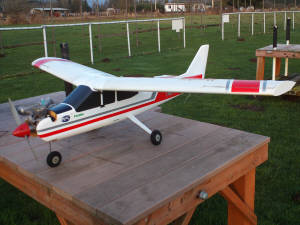 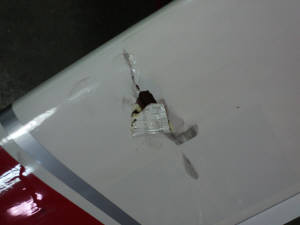 Part 3: The NexStar gets more Tail.

With the realization of not having enough tail surface here's a few photos of the next modification. Test flight to follow... 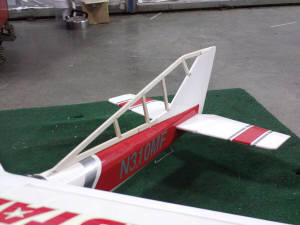 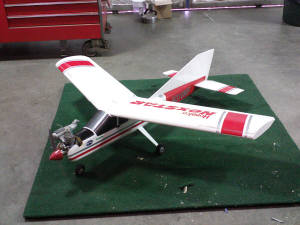 Jan 27 2011: Well, third times a charm... The third test flight with the enlarged tail feathers did the trick. The handling is nearly the same as the straight wing version with exception to weight, needing a final tweek of the aileron set up, touchy roll responce and needing a little more elevator. Also getting used to the new visual profile in flight will take a little time. After the first flight (as in the video) the secound flight I checked out the slow flight envelope. At the idle setting and at full elevator deflection I was not able to produce a stall. Being that the CG range is about tripple that of the straight wing this is not that suprising. At lower speeds and with the cg very close to the CP the elevator is not really needed, that is as long as the two remain in the same location. As fuel burns off the cg will move aft and the likelyhood of a stall at low speed is greater. So on to the next modification. What will it be...?

The next project slated for the next NexStar is raise it from the ashes. Jan 30 2011 at about 2:30pm while flying the latest version of my NexStar, having executed several touch and go's and full stop landings, slow flight and some aerobatics. While flying the up wind side of the pattern (to the west, facing south) as I began the cross wind leg I spotted an aircraft approaching the field at a very low altitude. The aircraft appeared to be about 200 to 250 ft agl (above ground level). As my model rounded the turn to the down wind at what may have been nearly the same altitude from my estimation, I directed my model aircraft to the east and descended to avoid a possible collision . As my model aircraft passed as what would appear below the GA airplane I lost sight of the model for a second or so and when finally regaining visual of my model aircraft, the GA airplane was passing nearly directly above me. My RC model was now many hundreds of feet to the east of my position at the pilots station. At this point my model aircraft was in a vertical dive at about 50 ft alt and moving fast enough to bury the engine and half the fuselage into the ground. There was no time to react.

I'm at this time going to refrain from contacting the FAA at this time but will be having a word with the pilot of the GA airplane and see where it will lead. The outcome of this encounter will determine my future action concerning this matter.

If any one while flying at the AERCF field observes any low flying GA aircraft Especially flying lower than the legal altitude of 500 ft AGL (above Ground Level in this area) please make a report as to the direction of flight and an estimated altitude. Please forward this information to Brad Heinitz (current AERCF Treasurer). If we can show a pattern of these occurrences' we as a club may be able to have the FAA place a marker on the local aeronautical charts to warn GA aircraft of the fact that this is not a GA field, and to remain clear of this area. I'll post updates as information is available.

There were several deaths involved, as three earth worms lost there lives in the crash. My condolences to there families. I regret I will not be able to notify next of kin.

Here's the after math of the incident...

P.S. the dirt ball is the engine...including the bodies of those that lost their lives this day... 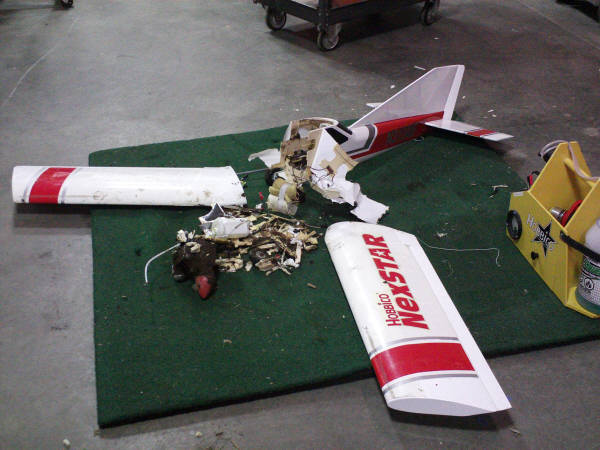 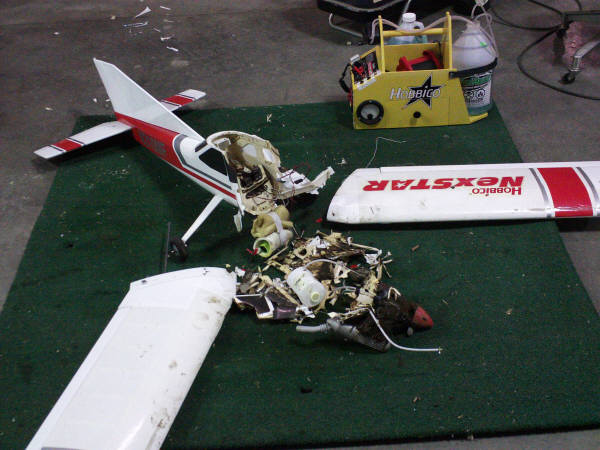 © Arlington Eagles R/C Flyers 2014. All photographs are copyright of respective club members and are reproduced here with permission.